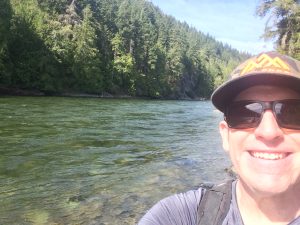 In 2009, I had a mole removed from my back. Even if it was carcinogenic, as I had removed completely, I did not think about it anymore. I was climbing out in May 2015 when I found myself having very little breath. So I went to get an x-ray and the doctor told me to go straight to the hospital; my right lung was almost completely sagging. The melanoma had moved to the walls of my lung causing fluid leaks. I spent 10 days in the hospital with a catheter in the chest that drained fluids from my lung regularly.

I then underwent a bronchial tube biopsy and the results showed stage 4 metastatic melanoma. A CT scan then showed several tumors in my kidneys, my spine and my neck. I had to travel to Kelowna to begin receiving combination treatment with Tafinlar and Mekinist. Back in September, I was already feeling better. However, my body became tolerant to treatment and my cancer came back.

I began to consult a naturopath who suggested I do research on immunotherapy in combination with Nivolumab and Ipilimumab. When my cancer came back, I was admitted to Kamloops Hospital waiting for my oncologist to decide between Keytruda immunotherapy treatment or to find a clinical study for the combination Nivolumab and Ipilimumab. He finally found a study in Edmonton and I went there despite the fact that I was very sick.

In 2009, I had a mole removed from my back with a wide excision surgery. Though it has been completely removed, so I stopped thinking about it.

I was out hiking in May 2015, when I began to feel surprisingly short of breath. I went in for an x-ray, and the doctor told me to go to the hospital immediately; my right lung had almost collapsed. The melanoma had moved into the pleura lining of my lung, causing fluid leakage. I spent ten days in the hospital, with a chest catheter draining my lung fluids regularly.

I then had a bronchial tube biopsy, the results of which came back as stage 4 metastatic melanoma. CT scans founds more tumours on my kidney, spine, and neck. I travelled to Kelowna to begin receiving the checkpoint inhibitor combination of Tafinlar and Mekinist. By September, I had begun to feel better; however, my body became immune to the drugs I was receiving, and my cancer came back.

I began seeing a Naturopath, who suggested I look into the immunotherapy combination of Nivolumab and Ipilimumab. When my cancer returned, I was admitted to the hospital in Kamloops, waiting for my Oncologist to decide between the immunotherapy Keytruda, or finding a clinical trial for Nivolumab and Ipilimumab. He found a trial in Edmonton, where I went, despite being very ill. During the first round of treatment, I was constantly dehydrated, despite draining three litres of fluid a day from my body. After the second round, I began to feel better. I spent six and a half weeks in the Cross Cancer Institute, taking pain relief medications and having fluid drained regularly from my lungs. After my fourth cycle of treatment, I was discharged from the hospital. While I still have nine treatments to go of Nivolumab, which I receive every second week, I am on track for a full immune response.

Your ticket for the: L’histoire de Chris