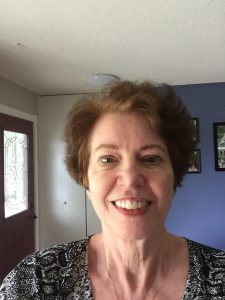 I was diagnosed with stage 4 melanoma in July 2017. In August I started nivolumab, of which I had a total of twelve treatments. After the fourth treatment the tumours expanded and caused a blockage in my bowel. I lost about 40 pounds and refused surgery, and in a week the tumour shrank. I was eating and lifting one pound weights to try to get some muscle. I continued treatment till February, when a sinus infection got out of hand and I had half a cup of black pus removed from my sinuses. At this point, I also developed macular cystoid edima in both eyes, and lost my sight. I had it treated, and my sight returned, though I need glasses. At the worst I was seeing 20/200; now I’m at 20/40.
I had two more treatments in March, then stopped because CT scans showed that it wasn’t working. I had one more CT to give a baseline to track the progress of the cancer; that CT showed only two spots of scar tissue and no cancer. That was April 2018. My husband and I have celebrated our fortieth anniversary with our entire family, canoed, zip-lined, climbed a pyramid, gone swimming with dolphins, and attended all of the sport and music events of our grandchildren since then. Life is good, and I’m enjoying every minute of it.